"Things Can Only Get Better" - Howard Jones

Maybe it's the hairstyle, or the ultra-eighties synths. Whatever the reason, Howard Jones's infectious anthem, from his second album (Dream Into Action, 1985), hasn't received the respect and consideration it deserves. It's wedded to a rambunctious beat reminiscent of another song on our list, Eminem's "Business". Jones sings the blazes out of the tune, pushing his range to the limit -- just the thought of thousands of progressives all trying to hit the high notes is reason enough to include it here. The lyrics are another; the first verse and chorus are the core of the song's anthemic potential. Jones shifts from a declaration of common progressive purpose, to a surprisingly poignant evocation of the fear of risk; and then, with the jubilant "Whoa, whoa" refrain, he liberates us from all anxiety:


We're not scared to lose it all
Security throw through the wall
Future dreams we have to realize
A thousand skeptic hands
Won't keep us from the things we plan
Unless we're clinging to the things we prize.

And do you feel scared? -- I do
But I won't stop and falter
And if we threw it all away
Things can only get better.
Whoa, whoa whoa whoa oh oh ...

Of course, we know in our hearts that things can also get worse. But by deploying Jones's reflective, uplifting anthem in our protests, we can bring his idealistic vision a little closer to reality. 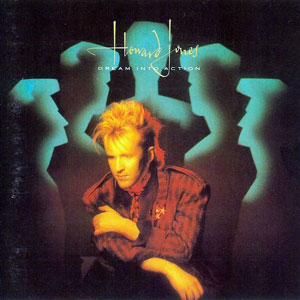 Wikipedia page for "Things Can Only Get Better."

The original video is tons of fun. Maybe our progressive throngs could wear Howard wigs to go with their Anonymous masks.