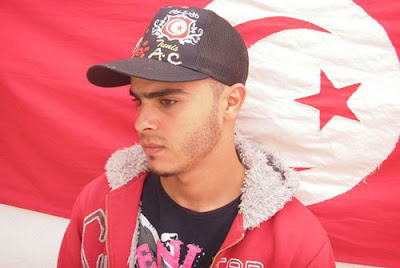 "Rais Lebled," by the Tunisian rapper El Général (Hamada Ben Amor), took the Arab world by storm at the outset of 2011. It also landed El Général in jail, essentially for lèse-majesté against Tunisian president Zine El Abidine Ben Ali. It is Ben Ali who appears in the quease-inducing clip at the beginning of the video for "Rais Lebled," harassing a young boy, before El Général cranks it up with a highly-charged indictment of the regime's political malfeasance, and the impoverishment of the people:

The video is a powerful slice-of-life in itself, "haunting and raw. It showed the young rapper sauntering through a darkened, sewage-strewn alley to a secret site to record. The makeshift studio had graffiti spray-painted on the wall. He beat out the song in front of an old-fashioned mike, with no one else in sight. Afterwards, he ambled back down the alley into the night. His face was never in the light, his identity remained unclear. Going public was too dangerous." (Robin Wright, Rock the Casbah [2011], p. 116.)

The anthemic chorus (beginning at 1:14 of the video) declares, in English translation:

Mr. President, your people are dying
People are eating rubbish
Look at what is happening
Miseries everywhere, Mr. President
I talk with no fear
Although I know I will get only trouble
I see injustice everywhere. 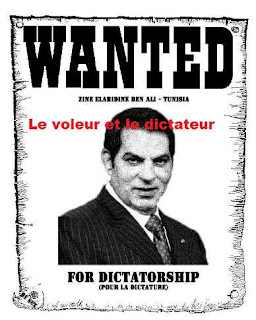 As Robin Wright describes it, "El General's song was an instant sensation. Its outrage resonated especially among the young. It broke through the climate of fear in a country where no politician had dared to criticize a president in power for almost a quarter century. His incendiary rap quickly rippled across the Internet. The amateur video was even picked up by Al Jazeera, the twenty-four-hour Arabic news channel. The song had a transformative influence. It set the stage for the Jasmine Revolution that broke out a month later. It did what many Tunisians dared not do -- speak out." (Wright, Rock the Casbah, pp. 116-17.) When protests broke out after the self-immolation of Mohamed Bouazizi, a street vendor in the city of Sidi Bouzid, "the same problems ... echoed through the plaintive rap lyrics. As protests over Bouazizi's plight spread across the country, El General's rap became the rallying cry. Verses were sung by tens of thousands of Tunisians in street demonstrations demanding the president's ouster. ... Two weeks after the Tunisian president abruptly fled, El General performed in public for the first time. Wearing the Tunisian flag draped around his shoulders, he belted out his anthem for a crowd of thousands. His appearance brought the Jasmine Revolution full cycle." From there, "Rais Lebled" spread: "El General's song became the anthem of revolutions across the region. It was sung in street demonstrations from mighty Egypt to tiny Bahrain." (Wright, Rock the Casbah, pp. 117-18) As Time Magazine wrote in February, with Bahrain racked by protests:


At 6:30 p.m. on Feb. 15, as thousands of people gathered to protest against their ruler at a busy intersection in Manama, the capital of the small island nation of Bahrain, you could just about hear over the general hubbub the anthem of the young people who have shaken regimes from North Africa to the Arabian Gulf. It wasn't a verse from the Koran. It wasn't a traditional tune from the region. It was rap. A reedy female voice shouted out, several times, the first line of "Rais Lebled," a song written by the Tunisian rapper known as El Général. "Mr. President, your people are dying," the woman sang. Then others joined in. "Mr. President, your people are dying/ People are eating rubbish/ Look at what is happening/ Miseries everywhere, Mr. President/ I talk with no fear/ Although I know I will get only trouble/ I see injustice everywhere." Bahrain, as it happens, doesn't have a President; it's ruled by a King, Hamad bin Isa al-Khalifa. No matter. The protesters in Bahrain knew that "Rais Lebled" was the battle hymn of the Jasmine Revolution that brought down Tunisia's dictator, Zine el Abidine Ben Ali, and that it was then adopted by the demonstrators in Cairo's Tahrir Square who toppled Hosni Mubarak. Now it had come to Bahrain, as rage against poverty and oppression swept the Arab world from west to east.

In all these cases, aloof and ossified systems are being undermined by youth who see a future only of unemployment, voicelessness, and boredom. Greek and British and minority American youth might well identify, suggesting that El Général has put his finger on one of the major political and social faultlines worldwide in the twenty-first century.

"Rais Lebled" itself is a reminder of the global reach of hip-hop, and for non-Arabic speakers, a reminder of the sheer power of well-chosen syllables, and an emphatic vocal delivery, to create an anthem that transcends language and culture. "Rappers are now among the most potent new messengers of political change," notes Robin Wright. "Hip-hop has emboldened the young to lash back at both extremists and autocrats. Its songs have become the anthems of protests across the Arab world. It has also been a bridge to other cultures, fostering a sense of commonality rather than a clash." (Wright, Rock the Casbah, p. 120)

One could argue -- I would argue -- that "Rais Lebled" is the political anthem of the twenty-first century so far.

English Lyrics
This is a hybrid English lyric drawn from sources including YouTube, Time magazine, and the text as given in Robin Wright, Rock the Casbah (2011, pp. 116-17). Thanks to Dave Korzinski for input. If anyone thinks they can improve on this translation, please contact me.

To the president, today I wanna say something to you,
It is on my behalf and on behalf of my people who are living in misery
2011! Still people dying of hunger!

He wanted to work, he wanted to survive, but his voice is silenced
Go to the streets and take a look,
People are treated like animals, police are monsters
Speaking only with their batons, tac-tac-tac, they don't care
Because there's no one to say no,
Not even the law or the constitution.

Every day, I hear of a new lawsuit
Where the poor were set up
Although they know he or she's a decent person
I see snakes (powerful men) everywhere biting our girls
Will you accept for your daughter to be bit?
I know my words are so hard
You are a father and you wouldn't allow that for your sons
Thus, take my message as one from a son to his father.

Mr. President, we're suffering like dogs,
Half the people living in shame.
Misery everywhere,
People are eating from garbage cans.
Today I'm speaking for the people,
Crushed by the weight of injustice.
I've chosen to speak,
Even though many have warned me against it.

They steal in plain sight.
No need to name them,
You know very well who they are.
A lot of money should have gone to development,
To schools, to hospitals, to housing.
But the sons of dogs
Are instead filling their stomachs.
Mr. President, your people are dead.

Song appears on: Internet MP3 and video only, to my knowledge.

You can stream the MP3 here.

There's a version of the video with French subtitles.