At the mid-seventies peak of his career, Elton John -- aided by his American lyricist, Bernie Taupin -- was so prolific that he could deliver a studio album every six or eight months, and still save a stupendous cut like "Philadelphia Freedom" for a stand-alone single. John and Taupin's tribute to Billie Jean King's US tennis team -- and to the spirit of freedom that Philadelphia symbolizes for US patriots -- went straight to the top of the charts in 1975, and became a much-played theme song during the bicentennial summer of 1976. A loving nod to Philly soul, "Philadelphia Freedom" also incarnated its spirit. It's the "blackest" of Elton's hits, and the funkiest.

Progressive activists in the United States often find themselves tarred as "anti-American," with patriotic discourse now largely a right-wing preserve. Moreover, songs evincing a progressive patriotism are always prone to be appropriated and corrupted by the Right -- the fate of Bruce Springsteen's "Born in the USA" under Ronald Reagan being an emblematic example.

For this reason, it's worth seeking out songs that tap the purest patriotic wellspring, and can be directed to a progressive purpose -- as, indeed, Billie Jean King was a powerfully progressive figure in the 1970s, breaking barriers for women and openly LGBT public figures. One suspects that Elton, still in the closet at this time, responded personally to this aspect of the "Philadelphia Freedom" tennis squad, and indeed the song would sound great at a gay-rights rally. But with its rollicking and crowd-pleasing flavor, it's worth pulling out to warm up any demo or sit-in, especially one in an iconic public space or outside a government building.

The lyrics are some of Taupin's best, forsaking his rustic proclivities and literary pretensions for a personable, peppily urban style. John's exuberant vocals, the playing of his crack backing band, and Gene Page's orchestral arrangement -- all lend an indelible punch and swing to what is arguably Elton's crowning moment:


I used to be a rolling stone you know, if a cause was right
I'd leave to find the answer on the road
I used to be a heart beating for someone, but the times have changed
The less I say the more my work gets done

For anthemic purposes, the second verse could perhaps be skipped, the chorus reprised, and the closing call-and-response of "I love, love, love you, yes I do! -- Philadelphia freedom ..." repeated ad infinitum. Just let the Tea Party try to appropriate the language of liberty after that.


Elton's performance of the song on Soul Train in 1975 was a boundary-busting move that reflected the warm reception of the song by African-American audiences. He is clearly singing over a tape, but it's a spirited vocal nonetheless:

"Philadelphia Freedom" was released as a single in February 1975, backed with Elton's live duet with John Lennon on "I Saw Her Standing There." Its first album appearance was on Elton John, Greatest Hits Volume II (1977), track 6. 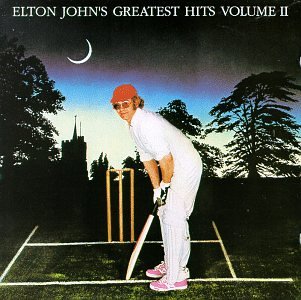 Elton performing the song with the Backstreet Boys (!) at the Grammy Awards ceremony in Philadelphia in 2000:


Who knew Ike & Tina Turner did a cover version of the song?