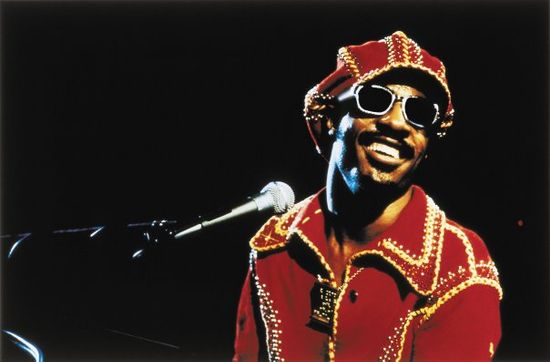 The first words are "Good morn," but they might as well be "Good mourn." This is one of Stevie Wonder's most mournful, slow-building, and hypnotic tunes, beginning with dirgey a cappella choral riffs, and continuing through Stevie's lovelorn lament for a world possessed by hate.

The leadoff cut for Stevie's monumental musical feast, the double-album-plus Songs in the Key of Life (1976), "Love's in Need of Love Today" seems to last forever. It's actually only a little over seven minutes long. But while the opening bars, and the excursions in the latter half of the song, offer clues as to how vocal jams and improvisations might be crafted, the heart of the lyrics and melody is fairly compact:

It's a great all-purpose anthem, uplifting but cautionary, urgent but reflective. Basically, it's made for any evening scene illuminated by candlelight. But it would also be a motivating first-thing-in-the-morning tune for sleepy activists: "Love's in need of love today / Don't delay ...", now brush your teeth and go out and fix things.

Here's Stevie's original version of "Love's in Need ..." from Songs in the Key of Life, released in September 1976 and entrenched ever since among my desert-island records:


Criticized by some as too rambling and diffuse when it first appeared -- a mere stepping-stone en route to buoyant Songs in the Key of Life classics like "Sir Duke" and "I Wish" -- "Love's in Need of Love Today" has aged exceedingly well. It was assisted, and its anthemic potential confirmed, by George Michael's decision to adopt the song as a concert showpiece -- perhaps most memorably at the 1987 Stand By Me AIDS benefit, later released as a B-side on the "Father Figure" 12-inch single:

The connection now forged with the cause of AIDS sufferers, through Michael's renditions of "Love's in Need ..." at this and subsequent benefits, would likely influence its deployment as a progressive anthem as well.

A live version by Stevie.

Stevie and George Michael duet on the tune!

Kudos to the great bassist Nathan Watts, who does sublime work here and elsewhere on Songs in the Key of Life.