The Mexican band Molotov is best known for raunchy rap-rock, and there was no shortage of it on their 1997 album ¿Dónde Jugarán las Niñas? (The title was a play on the title of a record by the group all Mexican grandmothers like, Maná, which translates as "Where will the little children play?" Molotov countered with: "Where will the little girls play?", with a suitably salacious album cover.) But amidst blasts of their usual heavier fare was this jewel, one of the most popular and potent protest songs in recent Latin American history. Against a lugubrious, even mournful musical backdrop, the Molotov crew launched their no-holds-barred, occasionally obscene denunciation of corruption and political enervation in their homeland of Mexico.

Spanish lyrics can be found here. A good English translation is hard to find online, but there's one on YouTube, running as subtitles on the official video. A transcription follows, with some minor adjustments; best to let the song speak for itself:

The police are extorting you (money)
But they live on what you pay
And if they treat you like a delinquent (thief)
It's not your fault, thank the ones in charge.

That could uproot the problem
And change our country's government
The bureaucrats
The people who like the crumbs
That's why I complain and complain
Because here is where I live, I'm no longer an asshole

You don't see the government jobs
There are people who are getting richer
People who live in poverty
Nobody does anything because nobody's interested
The people above you hate you,
More people who want their heads.
If you give power to power they'll come after you harder
Because we were a world power
We're poor, they treat us badly. 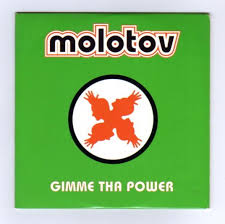 Because we're not born where there's nothing to eat
There's no need to ask ourselves how we're going to do it
If they say we're got no balls, yes we have -- long live Mexico, you bastards!
Let the Mexican power be felt, let it be felt
All together like brothers, because we are more
All together like brothers, because we're following lazy assholes
Who take us wherever they want, and it's our sweat that keeps them there
It keeps them there eating hot bread, that bread is our people's bread.

Despite its proudly Mexican perspective (“¡Viva México, cabrones!”), "Gimme Tha Power" spread rapidly across Latin America as a generalized anthem of youthful rebellion -- I first heard it in Argentina, at the other end of the hemisphere. Its scabrous tone, frat-boy obscenities, and healthy contempt for corrupt and parasitic elites fit well with the generally anti-establishment mood that brought a generally leftist contingent of leaders to power in Latin America in the 1990s and 2000s. As that critique has spread worldwide, perhaps the chorus of "Gimme Tha Power" -- bilingual to begin with -- will hold some appeal for non-Spanish-speaking protesters and occupiers. The slow yet steady beat is also a great rhythm for a resolute, implacably advancing movement. 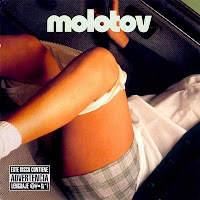 A version of the official video with good English subtitles.

"How does the Molotov song Gimme Tha Power reflect Mexican society?" (Answers.com)
Posted by Adam Jones, Ph.D. at 10:19 AM