A highlight of Green Day's epic 21st Century Breakdown (2009), "East Jesus Nowhere" also establishes the L.A. punk-rockers as the only band to place two anthems on this list from the same record (see also "Know Your Enemy"). It's a withering polemic against religious extremism and fundamentalism -- of whatever stripe, though the direct targets here are self-proclaimed Christians. It's married to monster riffs and a stomping, stadium-shaking beat:

"East Jesus Nowhere" also has a nice ecumenical touch, with the biracial/multiracial summons to mobilize a new activist generation:


All the white boys
And the black girls
You're the soldiers
Of the new world!

The core of the anthem, I feel, lies in a verse and chorus just begging to be sung as Billie Joe Armstrong and his mates sing it -- loudly, aggressively, tunefully -- wherever religious ranters and misogynists and homophobes gather to express their bigotry:


Put your faith in a miracle
And it's non-denominational
Join the choir we will be singing
In the church of wishful thinking.

A fire burns today
Of blasphemy and genocide
The sirens of decay
Will infiltrate the faith fanatics.

-- followed by some handclaps, maybe, to mimic the crisp riffing that follows, then back to "A fire burns ...?" You figure it out. Here's the original version of "East Jesus Nowhere" from 21st Century Breakdown:


One would have to choose an appropriate setting with this song; it doesn't pull its punches, and it shouldn't be used just to slag religious believers. Then again, there are plenty of honorable cops in the world, and we still need "Fuck Tha Police." 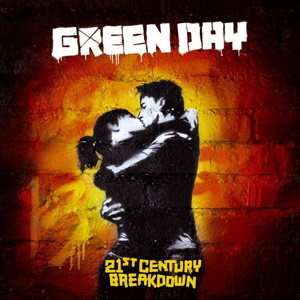 A quite ruthless rendering at the Fox Theater, Oakland, CA, in 2010:


And a crazy live version from Japan, maybe my favorite: