The 1980s was the first decade of the benefit single, most notably supporting the cause of famine relief in Africa. The problem with most of these efforts was twofold: they were often drippy and saccharine, lowest-common-denominator (see "We Are the World" and "Tears Are Not Enough", though the original Band Aid production "Do They Know It's Christmas" was spirited by comparison). And the songs tended to be rather apolitical -- look how dreadful everything is, let's all pull together, believing makes it so, etc.

At the height of the strings and syrup, in 1985, came "Sun City" by Artists United Against Apartheid -- a multinational and multiracial coalition forged by Little Steven Van Zandt, best known as the guitarist and backing vocalist for Bruce Springsteen's E-Street Band. It was Van Zandt (wearing the bandanna in the photo at right) who wrote the song and its lyrics, denouncing not abstractions like famine and poverty, but a specific structure of oppression: apartheid (racist rule by whites over blacks) in South Africa. Moreover, the song zeroed in on a heated controversy in the pop-cultural field: the surreally ritzy resort of Sun City, in the allegedly independent "homeland" of Bophutswana, actually a fiction by which South Africa's white leaders maintained a veneer of "sovereignty" for the country's overwhelming black majority. A number of major pop artists, including Queen and Rod Stewart, had been lured by fat paychecks to play at Sun City. This undercut the mounting cultural boycott of the apartheid regime, which accompanied other economic, political, and sports-related sanctions.

The response of Little Steven and the enormous gaggle of artists he assembled was to declare defiantly:

You can't buy me, I don't care what you pay
Don't ask me, Sun City, because I ain't gonna play.


The apartheid regime's "homelands" policy was denounced as an outrageous sham:

Relocation to phony homelands
Separation of families I can't understand
Twenty-three million can't vote because they're black
We're stabbing our brothers and our sisters in the back!


The attack on western (especially US) government policy was equally bracing and explicit:

Our government tells us we're doing all we can
Constructive engagement is Ronald Reagan's plan
Meanwhile people are dying and giving up hope
Well this quiet diplomacy ain't nothing but a joke.

And my, how it all did rock (and rap), from the very first get-off-your-butt drum salvo. The "na-na-na-na-na-na" hook, the "Ain't gonna play Sun City" refrain, and several of the key stanzas would all be a welcome presence at anti-racism and anti-corporate demos, or in any context where a cultural boycott is pursued as a strategy against a repressive regime.

Here's the original version of "Sun City," from the eponymous album by Artists United Against Apartheid, accompanied by the official video, filmed on the streets of New York City. Among the 49 artists involved, watch for contributions by Peter Gabriel, Rubén Blades, Pete Townshend of The Who, Bob Dylan, and Peter Garrett of Midnight Oil. (The "Sun City" album, which you can find complete here, also includes the original version of the powerful "Silver and Gold", by Bono of U2 with Keith Richards and Ron Wood, which has anthemic potential as well.) 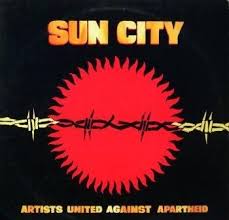 An informative Wikipedia page for the "Sun City"/Artists United Against Apartheid project.

Little Steven Van Zandt introduces and sings the song at the close of the 1988 Tribute to Nelson Mandela at Wembley Stadium, London (on Mandela's birthday, while he was still in jail). Simple Minds provides the musical backing, and many performers lend a hand: