Cockburn's personal experience was with Guatemalan refugees who had fled across the border to rudimentary camps in Mexico, where they were still subject to Guatemalan army harassment and murderous incursions:


On the Rio Lacantun, one hundred thousand wait
To fall down from starvation -- or some less humane fate
Cry for Guatemala, with a corpse in every gate
If I had a rocket launcher ... I would not hesitate.

Then came the gut-punch of the final verse:


I want to raise every voice -- at least I've got to try
Every time I think about it water rises to my eyes.
Situation desperate, echoes of the victims cry
If I had a rocket launcher ... Some son of a bitch would die.

How one receives this emotion, and its open proclamation in song, will depend on whether one not only recognizes a right of self-defense, but can acknowledge a vengeful personal desire to see the tormentor routed. It's a sentiment not that far removed from "Fuck Tha Police", really. Cockburn reports that some his more avowedly pacifist Christian followers were thrown by "Rocket Launcher": "a lot  of people wrote letters urging me, exhorting me, not to lose the way. At no point was I threatened with excommunication, but there was definitely a kind of standing back and going, 'What is this?' on the part of a lot of people." (Baltimore Sun, March 18, 1988)

There is also a whole constituency, among whom this listener may be counted, whose response to the idea of a son-of-a-bitch dying in this context was, and is, "Damn right." Clearly, "Rocket Launcher" is an anthem that's appropriate only when the right to armed self-defense is proclaimed, perhaps especially in a western hemispheric context. But it would be foolish to think that this issue is less relevant, in the Americas and elsewhere, than it was when Cockburn issued his scathing jeremiad.

Here's the original recording of "If I Had a Rocket Launcher" as released on Stealing Fire (1984):

A potent, stripped-down acoustic performance of the song on Austin City Limits:

Available on Bruce Cockburn, Stealing Fire (1984), track 8. The full lyrics are given above. 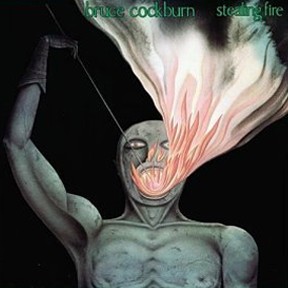 If you only buy one Bruce Cockburn album, buy the luminous double-CD compilation Waiting for a Miracle: Singles 1970-1987 (1987), which also includes "If I Had a Rocket Launcher" (track 25).