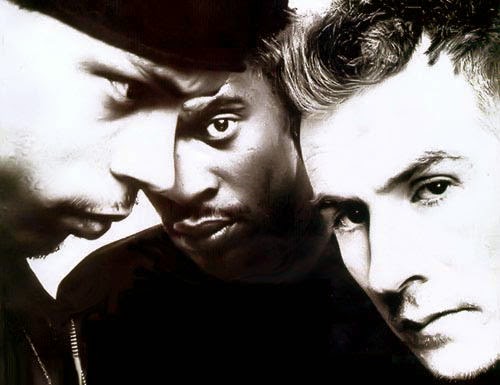 If you think Massive Attack sounds like a thrash-metal band, you've never heard this Bristol-based "trip-hop" band, one of the brightest lights of 1990s Britpop -- "a darkly sensual and cinematic fusion of hip-hop rhythms, soulful melodies, dub grooves, and choice samples" (Jason Ankeny). The group is renowned, among other things, for its shifting membership from record to record, and its propensity to supplement the slow-rapping vocals of group members with trained female voices, often to dazzling effect (see also "Safe from Harm"). On their second album, Protection (1994), they conscripted Tracey Thorn of Everything But the Girl to deliver a show-stopping paean of love and solidarity unto death:

You're a boy and I'm a girl
But you know you can lean on me
And I don't have no fear
I'll take on any man here
Who says that's not the way it should be.

Sometimes you look so small, need some shelter
Just runnin' round and round, helter skelter
And I've leaned on me for years
Now you can lean on me
And that's more than love, that's the way it should be
Now I can't change the way you feel
But I can put my arms around you
That's just part of the deal
That's the way I feel
I'll put my arms around you


The song has overtones of Lauryn Hill's "To Zion" and even the Stones' "Gimme Shelter", and it works as an anthem for many of the same reasons. It's an admirably democratic, gender-bending lyric, but it always feels anchored in a distinctly female sensibility and solidarity. I could have imagined it sung at the Greenham Common Women's Peace Camp in the 1980s. Today, it would serve in many women-centered activist settings, from commemorations of the December 6 massacre in Montreal, to pro-choice demos. (It must be said that pro-life activists would find it appealing as well.) Finally, there is something Gandhian about "I stand in front of you / I'll take the force of the blow"; the song could be inspiring for pacifist protests and acts of non-violent resistance.


A gorgeous 1999 live version by Thorn and Everything But the Girl. Sonically, especially with the languorous female vocal and keyboard punctuation, it's highly reminiscent of Sade's great cover of Timmy Thomas's "Why Can't We Live Together":

Discogs.com page for the Protection album.

James Brown's "The Payback" (1973), the guitar, bass, and hi-hat of which were sampled for "Protection." As Wikipedia notes, "The subject of 'Protection' is an inversion of the aggressive, upbeat revenge scenario in James Brown's track."