Take my Dad's word on this one. Many years ago, he was doing a self-improvement seminar with a mostly younger crowd, and one of the assignments was to choose a popular song that said something significant about you personally. Dad thought it would be equally interesting to ask his son to roam his large repertoire of pop music for songs that he thought said something about his Dad. I chose three, including both the studio and live versions of "I Still Haven't Found What I'm Looking For." The album version, on U2's breakthrough album The Joshua Tree (1987), was one of three US number-one singles from that seminal record. But Dad opted for the live version, recorded with the New Freedom Gospel Choir at Madison Square Garden and featured on the Rattle and Hum album (1988). (A rehearsal version is included in the Rattle and Hum documentary film of the same year.)

What resonated with Dad is what resonated with me and a few tens of millions of other fans of this, one of the most iconic U2 songs. Just as the Rolling Stones' "Gimme Shelter" supplies shelter as it pleads for it, so does the heartfelt yearning of "I Still Haven't Found ..." deliver precisely the ecstatic transcendence that it's striving for. One learns, in classic Christian (and also Buddhist) fashion, that the transcendence is in the striving; the finding in the still-haven't-found.

This quite sophisticated message -- half-melancholy, half-visionary -- is wrapped in melodic package of tremendous verve and bounce. The rhythm section of Adam Clayton (bass) and Larry Mullen, Jr. (drums) deserves special credit here. Clayton's is a beautifully loping, good-humored bass riff, while Mullen displays why, as a drummer, self-taught is often better (see also Keith Moon). His off-kilter yet perfectly-placed fills lend punch and uplift to the song. According to Daniel Lanois, co-producer of The Joshua Tree with Brian Eno: "It was a very original beat from Larry. We always look for those beats that would qualify as a signature for the song. And that certainly was one of those. It had this tom-tom thing that he does and nobody ever understands. And we just didn't want to let go of that beat, it was so unique."

It's a dirge you can dance to, and Clayton and Mullen are mostly to thank for that. But the guitarist and singer are no slouches either. The Edge's guitar lines are among his most janglingly memorable, and this is one of Bono's truly soulful and searching vocal performances. Two of them, in fact: he pushes his range in both the studio and the live-choir versions, and he wins through big time. 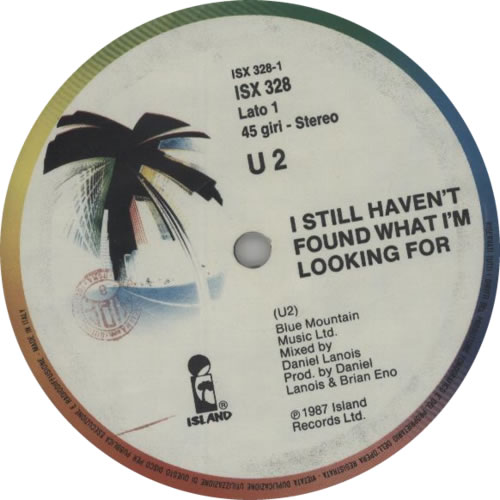 As a progressive anthem, it is a somewhat offbeat choice for the reasons just alluded to. As a chart-topping hit, the music has to deliver what the lyrics deny. But in a political context, "I still haven't found what I'm looking for" is almost the quintessential expression of the protester's stance. Given that it also scores around 98% on the song-recognition scale, it's a guaranteed singalong, with varied uses. It could be sung after a partial victory is scored, for example, to remind comrades of the struggle that still lies ahead. It could be sung in quite raucous and demanding protest. And, perhaps most appealingly, it could be sung at vigils -- candlelight and otherwise -- as an anthem that expresses frustration, but also stoicism and questing and commitment.

The studio version of "I Still Haven't Found What I'm Looking For," from the gazillion-selling 1987 album The Joshua Tree. Both expansive and gorgeously claustrophobic.


The gospel reworking of the song, in rehearsal with the New Voices of Freedom choir in Harlem. From the film Rattle and Hum:


And here's the bootleg video of that classic MSG performance:

Gospel version with the New Voices of Freedom on Rattle and Hum (1988), track 6. 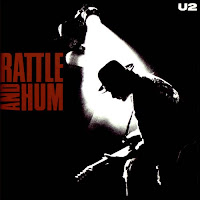 Wikipedia page for "I Still Haven't Found What I'm Looking For."
Posted by Adam Jones, Ph.D. at 2:16 PM