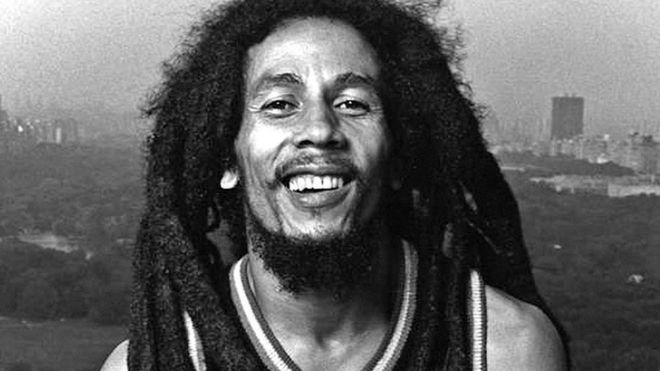 A strong candidate for the most beautiful song ever written, Bob Marley's "Redemption Song" exists in both acoustic and electric versions. But it is the spare solo take which defines the song, and which closes Marley's final album, Uprising (1980) and his gazillion-selling posthumous Legend collection (1984). Marley's spartan, solitary lyrics are built around a speech by Marcus Garvey (see also Burning Spear's "Tradition" on this blog). They move from the days when his people were incarcerated and sold into slavery (the opening stanza is perhaps the most vivid brief encapsulation of enslavement in the English language):


Old pirates, yes, they rob I;
Sold I to the merchant ships,
Minutes after they took I
From the bottomless pit.

-- to the urgent uprisings of the present:

We forward in this generation
Triumphantly. ...
How long shall they kill our prophets,
While we stand aside and look?

-- to a millenarian future:

Have no fear for atomic energy,
'Cause none of them can stop the time ...

In the chorus, singing with a slightly cracked voice (perhaps affected by the cancer that would shortly kill him), Marley offered the most anthemic summation of his life's message and mission:


The bard's life was cruelly extinguished in May 1981, less than a year after Uprising was released. But three decades later, Marley -- the single most iconic cultural figure of the twentieth century -- has millions to help him sing his redemption songs.

Song available on: Bob Marley & the Wailers, Uprising (Tuff Gong/Island, 1980), track 10 (the remastered 2001 version of the album follows with the band version of "Redemption Song").

"Redemption Song" included in the New Statesman list of the 20 greatest political songs.
Posted by Adam Jones, Ph.D. at 1:03 PM